Scouting isn’t rocket science! Every time a Premier League side signs a good foreign player the nation goes crazy. Who is this mystery guy? Where did he come from? Anyone with a decent knowledge of the game outside the UK would have known that the likes of Santi Cazorla, Oscar and Papisse Demba Cissé were likely to succeed, and there are plenty more of them out there. So who’s the next “secret” star to watch out for? Who is the next Cabaye? 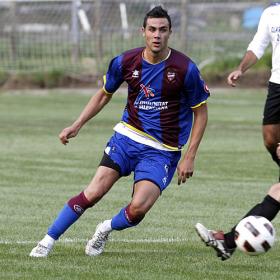 Rumour has it Vicente Iborra is high up on Brendan Rodgers’ wanted list for the January transfer window. We all know that Rodgers is more Football Manager devotee than Harry Redknapp-style punter, with a very clear idea of the attributes he requires from players in each position. So which of Brendan’s boxes does Iborra tick?

Well, he’s a solid midfielder with some similar attributes to Joe Allen, able to break play up and use the ball but inclined to sit in rather than press with the sort of energy Rodgers likes.

An upright, tall midfielder, his strengths lie in breaking up play and maintaining the side’s shape when they haven’t got the ball, as you might expect from a Levante player: their success has been built on defensive solidity and an ability to break effectively.

Iborra doesn’t tend to join in the counter attacks, but he can be an important attacking weapon. He’s often the springboard of a swift attack and has a good range of passing: although he’s right footed he can pass accurately over distance with his left as well. He has good vision and is able to play long, accurate balls down the channels for the likes of Obafemi Martins to run onto: Luis Suarez would enjoy that sort of service!

This rather eclectic video I found on youtube offers some idea of his strengths, particularly the first section, where he spreads some languid passes around, and the latter clip of a Villarreal attack which he covers without making a challenge, slotting into Zone 14 to reduce space.

The last match Iborra played in probably didn’t offer the best opportunity to judge his strengths: Levante’s home game against Barcelona required an even more solid defensive set-up than usual from Juan Ignacio Jiminez. As a result, Iborra’s role in the central midfield duo of a 4-2-3-1 required him to stand on the toes of the centre backs and ensure there was no space between the lines for Lionel Messi and his pals to roam. As a result, he didn’t get to touch the ball until 10 minutes and 48 seconds into the match!

However, the game did show certain key attributes. He was certainly tactically disciplined, never straying from his post, and he showcased his ability to read play and intercept, nipping in ahead of Barcelona players as he read passes swiftly.

So would he fit into the Rodgers way? Yes, but whether he’s a wise January target is a different matter. Looking at the Liverpool squad, you’d think he’d be used in rotation rather than be a first choice, with Allen and Nuri Sahin ahead of him in the pecking order. One would assume Rodgers will be looking for upgrades in the transfer window: squad depth can wait until the Summer. Waiting until the close season and then seeing first whether a deal could be cut for Sahin,  a player with a much broader passing range, seems a more obvious course of action.

One thought on “Vicente Iborra (Levante)”